India vs New Zealand: The groundsmen at Seddon Park, Hamilton were facing difficulty in controlling the ground covers due to the powerful wind that was blowing at the venue, this is when Sanju Samson stepped in and offered a helping hand. 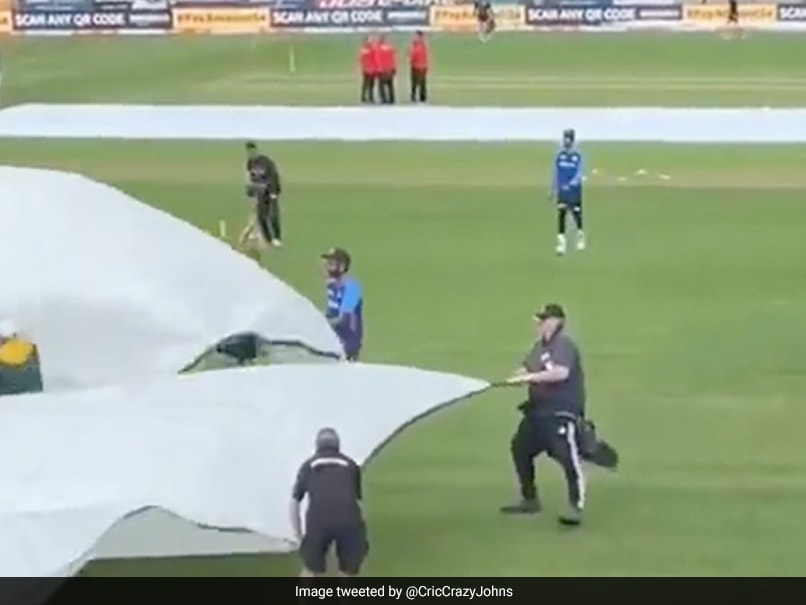 Apart from his batting, wicket-keeper batter Sanju Samson is also famous for his down-to-earth nature. Be it on or off the field, there are several instances where Samson's gentle actions have stolen the hearts of his fans. As of latest, a video is going viral on social media from the abandoned India vs New Zealand second ODI in which Samson's kind gesture towards the groundsmen at the Seddon Park, Hamilton grabbed everyone's attention. The staff were facing difficulty in controlling the ground covers due to some powerful wind blowing at the match venue, this is when Samson stepped in and offered a helping hand.

Samson, who was a part of India's playing XI in the first ODI vs New Zealand, was dropped for the second game in Hamilton for Deepak Hooda. The move of dropping Samson raised a few eyebrows as he had scored a 38-ball 36 in the first game.

After the 2nd ODI was abandoned due to rain, India captain Shikhar Dhawan revealed the reason for the change, saying, "We wanted the sixth bowler to come in, so Sanju Samson missed out and Hooda came in."

The second ODI match between India and New Zealand was called off due to rain. India were 89 for 1 in 12.5 overs when rain interrupted the play to see the game eventually being abandoned. The match was earlier reduced to 29-overs-per-side due to rain, but the next stoppage forced the match to end without a result. New Zealand captain Kane Williamson had won the toss and opted to bowl against India in the game.

India and New Zealand will square off in the third and final ODI on Wednesday in Christchurch. New Zealand currently lead the series 1-0.

Sanju Samson New Zealand vs India, 2022/23 Cricket
Get the latest updates on IPL Auction 2023 and check out  IPL 2023 and Live Cricket Score. Like us on Facebook or follow us on Twitter for more sports updates. You can also download the NDTV Cricket app for Android or iOS.