Barry Bannan scored a spectacular goal in Sheffield Wednesday's 3-2 win vs MK Dons in England's League One on Saturday. 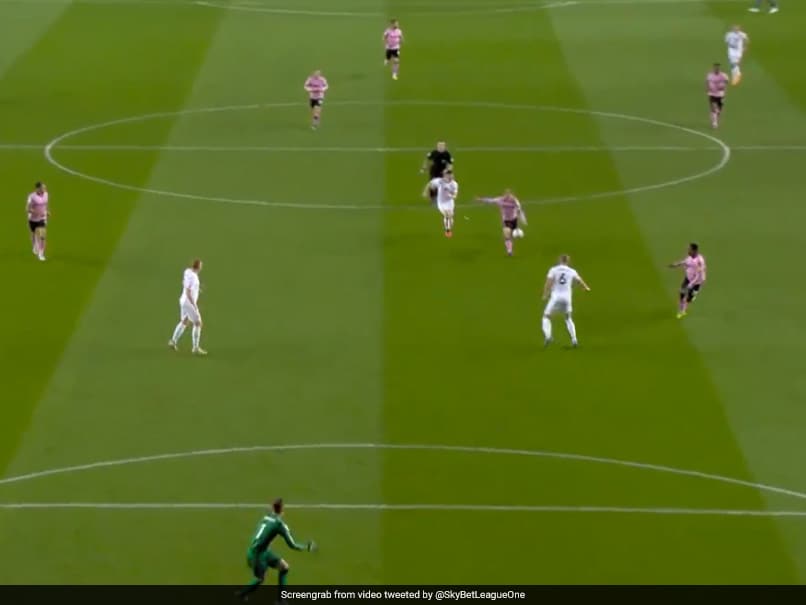 Barry Bannan scored a screamer from 40 yards out.© Twitter

Sheffield Wednesday captain Barry Bannan was in incredible form on Saturday as he scored a spectacular long-range goal against MK Dons in a League One match at the Stadium MK in Milton Keynes. The visitors were already leading 2-0 when Bannan got the ball near the halfway line in the 30th-minute. The midfielder was urged by fans to shoot and he took only one touch and scored a long-range screamer from 40 yards away from the opposition goal. His effort lobbed over the MK Dons goalkeeper Jamie Cumming and found itself in the back of the net. Sheffield won the game 3-2, with Saido Berahino (10') and Lee Gregory (20') scoring the other goals. Meanwhile, Troy Parrott (40') and Scott Twine (90+6') scored a goal each for MK Dons.

Here is the video of Bannan's unbelievable long-range screamer:

Fans took to Twitter to hail Bannan's goal and one wrote, "21 goals/assist this season. Top of every passing stat in the world. Player of the year by a country mile".

"He hit it that hard it knocked his hair off", another fan quipped.

He hit it that hard it knocked his hair off

After the win, Sheffield Wednesday are fifth in the league standings with 76 points from 42 matches with 21 wins, 13 draws and eight defeats. Meanwhile, MK Dons are third with 83 points from 43 fixtures.

Comments
Topics mentioned in this article
Sheffield Wednesday MK Dons Barry Bannan Football
Get the latest updates on Fifa Worldcup 2022 and check out  Fifa World Cup Schedule, Stats and Live Cricket Score. Like us on Facebook or follow us on Twitter for more sports updates. You can also download the NDTV Cricket app for Android or iOS.