Football fans around the world witnessed a jaw-dropping match in the FIFA World Cup 2022, where Japan visibly thrashed Germany 2-1, to register a win in their opening Group E clash.

Football fans around the world witnessed a jaw-dropping match in the FIFA World Cup 2022, where Japan stunned Germany 2-1 to register a win in their opening Group E clash. Leading 1-0 after a penalty goal by Ilkay Gundogan, Germany could not capitalise on new opportunities as Ritsu Doan and Takuma Asano came from behind and struck two goals for Japan in the second-half. After the win, reactions started pouring in for Japan from all over the world as fans were left stunned with the Asian side's miraculous win.

Japanese Tennis star Naomi Osaka took to Instagram and shared a quirky tweet from a fan after Japan defeated Germany in the FIFA World Cup 2022 clash. Before the match, a fan of Team Japan had written, "Japan will beat you and clean up the whole place, leaving the crime scene with no evidence."

Osaka shared the fan's post and captioned it with "Lol" and added some crying emojis to it. 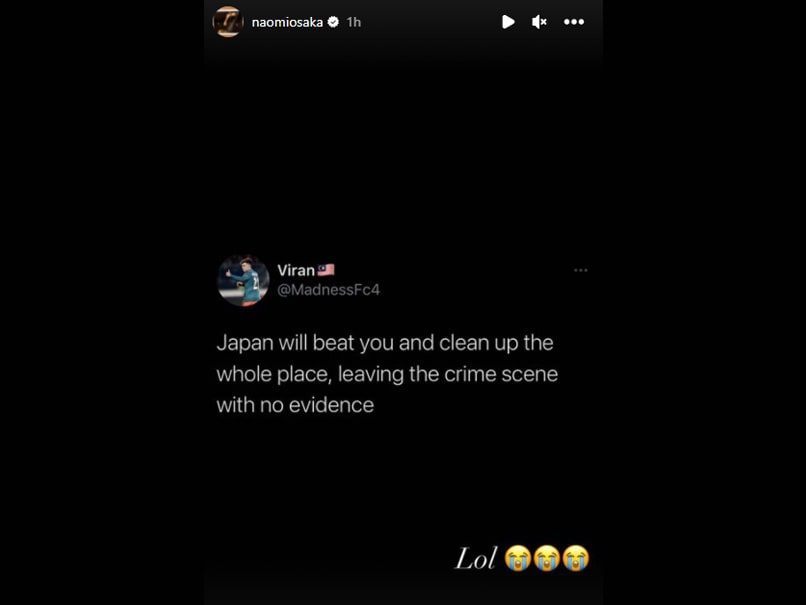 Coming to the match, the German team covered their mouths for the team photo before the match in a powerful protest against FIFA's decision to ban rainbow-themed armbands.
Hansi Flick's team came to Qatar under huge pressure to avoid the disaster of 2018, when they failed to make it out of the group stage in Russia as holders. They took the lead through a first-half penalty from Ilkay Gundogan and should have been out of sight after creating a host of chances.

But Japan hung on and equalised through substitute Ritsu Doan in the 75th minute. Takuma Asano then completed a remarkable turnaround eight minutes later, smashing the ball home to send the boisterous Japanese fans wild.

Germany's World Cup future is now on the line, with games to come in Group E against Spain and Costa Rica. Japan are eyeing a place in the knockout round after a dramatic comeback that scarcely looked possible at the end of the first half.

Never Be Satisfied, Stay Hungry: Sania Mirza To Gen Next
Comments
Topics mentioned in this article

Germany Ilkay Gundogan Takuma Asano Ritsu Doan FIFA World Cup 2022 Football Naomi Osaka Tennis
Get the latest updates on IPL Auction 2023 and check out  IPL 2023 and Live Cricket Score. Like us on Facebook or follow us on Twitter for more sports updates. You can also download the NDTV Cricket app for Android or iOS.