Nathan Collins had no complains for the decision as he walked off the pitch looking disappointed. 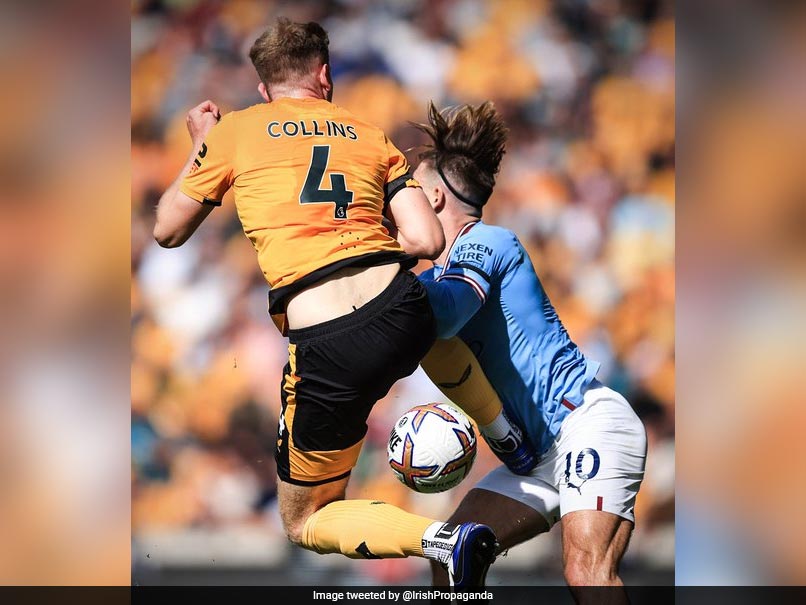 Nathan Collins was sent off for an ugly stomach-high foul on Jack Grealish.© Twitter

Wolverhampton Wanderers defender Nathan Collins was shown a straight red card for an ugly foul on Manchester City midfielder Jack Grealish during the Premier League fixture at Molineux on Saturday. The match ended in a 3-0 City win as Pep Guardiola's men briefly moved to the top of the Premier League points table. Grealish reduced Molineux to silence after bundling home a finely crafted City move in the opening minute of the match. Erling Haaland then doubled City's advantage.

Wolves lost any chance of a fightback when Collins was sent off for an ugly stomach-high foul on Grealish in the 33rd minute of the match.

Collins had no complains for the decision as he walked off the pitch looking disappointed.

Phil Foden capped City's stroll in the Midlands sunshine as the Premier League champions moved to the top of the table.

"The game started really well for us with the two goals and the red card. After the Champions League to come here at 12:30 with the quality they have, it was an incredible victory," Guardiola said.

"Jack played really good. He was strong and he made a good goal," Guardiola said.

Grealish added: "I'm always going to have people talking about me with the amount I got bought for.

"I owe the manager thanks for sticking with me after I didn't play well in midweek."

While the win took unbeaten City to the top of the table for a day, Arsenal regained the pole position with a 3-0 win at Brentford

Tottenham Hotspur are third in the points table, behind City on goal difference, following their 6-2 thrashing of Leicester City.

Manchester City Jack Grealish Erling Braut Haaland Phil Foden Football English Premier League
Get the latest updates on Fifa Worldcup 2022 and check out  Fifa World Cup Schedule, Stats and Live Cricket Score. Like us on Facebook or follow us on Twitter for more sports updates. You can also download the NDTV Cricket app for Android or iOS.