England vs India: Rahul Dravid was pumped as Rishabh Pant reached his century off just 89 deliveries and his celebration went viral on social media. 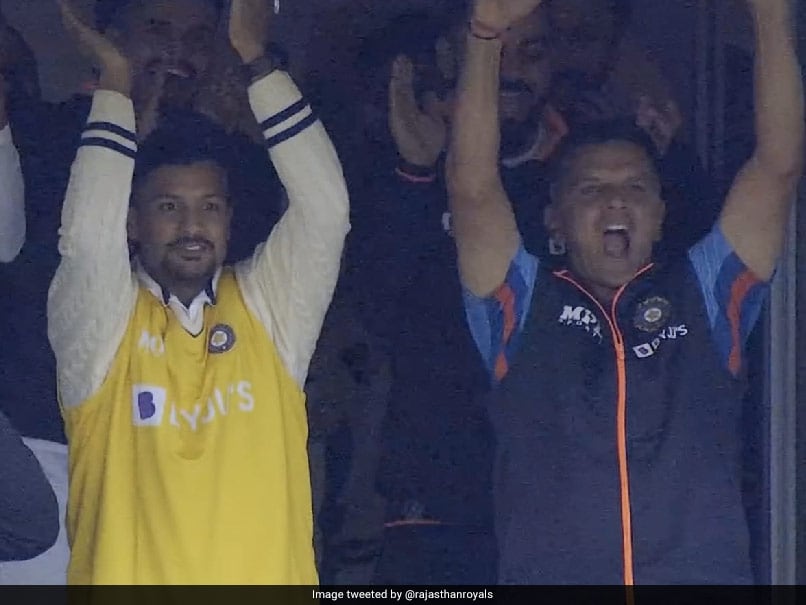 India wicketkeeper-batter Rishabh Pant smashed his fifth Test century on Day 1 of the rescheduled fifth Test against England at Edgbaston in Birmingham on Friday. Pant, who has scored 50+ scores in each of his last four Test innings, took just 89 deliveries to reach triple figures. The 24-year-old hit 19 boundaries and four sixes before getting out on 146. As Pant reached triple figures in the 58th over of the match, India head coach Rahul Dravid, who was sitting inside the dressing room, rose from his seat in joy, with both hands up in the air, to celebrate the youngster knock.

The moment where it all came together for #RP17

P.S You're a special guy if you can get Rahul Dravid to react that way #ENGvIND pic.twitter.com/OBiUVllVYN

Dravid is known for his calm demeanor and his animated reaction has since gone viral on social media.

This image sums up rishab pant's innings....
Rahul Dravid showing emotions at this level we dont see that much#INDvsENG pic.twitter.com/G9cNNauwAE

A usually-composed Dravid overwhelmingly applauds Pant for his quick-fire yet brilliant century.
You cannot not love test cricket #INDvsENG pic.twitter.com/DqX7Bk7SxR

Magnificent inning by Pant. Congratulations. Each shot played by him was Rahul Dravid's trust and confidence for him. Eagerly waiting for those who criticised Rahul Dravid for supporting Pant.#RDTW#RahulDravid pic.twitter.com/oxMVcPzpF8

The celebration by Rahul Dravid!!!! This tells the importance of the ridiculous knock by pant!!! And the gravity of it was just phenomenal!!!!

Man of the match??? Coming, pic.twitter.com/ra1gsPXPWF

The wall erupts! Only #Pant can play an innings that makes #Dravid go gung-ho. What a knock. #INDvsENG pic.twitter.com/r5ZRSz5QLa

Never watched Dravid this much excited..

Pant made it possible... pic.twitter.com/eIWOWDCm9W

India were reeling at 98 for five before Pant and Ravindra Jadeja rescued them with their 222-run stand for the sixth wicket.

At stumps, India were 338 for seven with Jadeja batting unbeaten on 83.

Pant's ton was his fifth in Tests and fourth one away from India.

It was also his third century against England, and second in the country, after his maiden Test ton at the Oval in 2018.

Sponsored by Vuukle
Comments
Topics mentioned in this article
England vs India, 2022

Ravindra Jadeja Cricket
Get the latest updates on IPL Auction 2023 and check out  IPL 2023 and Live Cricket Score. Like us on Facebook or follow us on Twitter for more sports updates. You can also download the NDTV Cricket app for Android or iOS.