Maharashtra will take on Saurashtra in the summit clash on Friday. Sent in to bat, skipper Gaikwad continued his sensational run with a 126-ball 168, while Bawne made 110 off 89 balls as the duo shared a 207-run partnership to lift Maharashtra to 350 for seven. 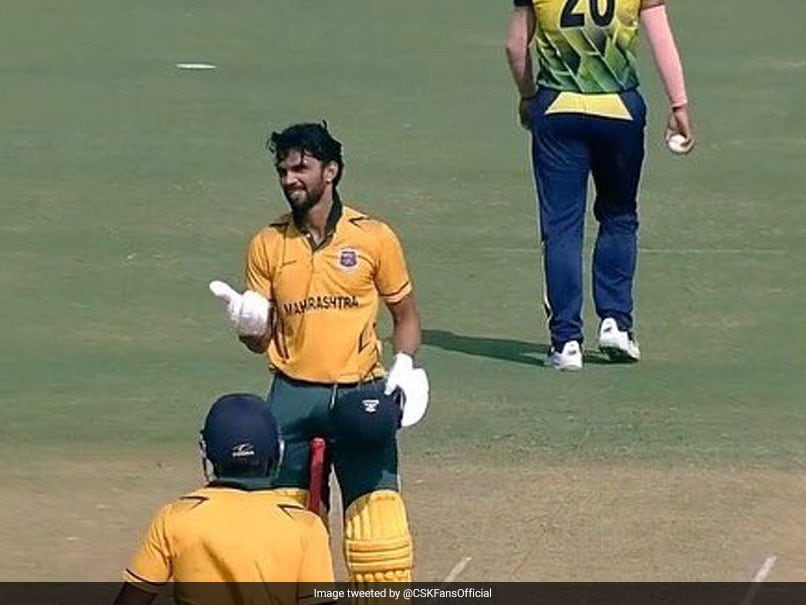 The in-form duo of Ruturaj Gaikwad and Ankit Bawne slammed scintillating hundreds as Maharashtra earned a maiden entry into the final of Vijay Hazare Trophy with a 12-run win over Assam here on Wednesday. Maharashtra will take on Saurashtra in the summit clash on Friday. Sent in to bat, skipper Gaikwad continued his sensational run with a 126-ball 168, while Bawne made 110 off 89 balls as the duo shared a 207-run partnership to lift Maharashtra to 350 for seven.

Chasing the stiff total, Rishav Das (53), Sibsankar Roy (78) and Swarupam Purkayastha (95) kept Assam in the hunt before the team succumbed to scoreboard pressure. In the end, Assam were stopped at 338 for eight.

After being reduced to 103 for four in the 16th over, Sibsankar and Swarupam added 133 to keep Assam's chase on track.

But after Sibsankar was sent packing in the 36th over, Assam lost a few quick wickets to lose the momentum.

Rajvardhan Hangargekar was the most successful bowler for Maharashtra, with figures of 10-0-65-4, while Manoj Ingale (2/51), Satyajeet Bachhav (1/57) and Shamshuzama Kazi (1/61) also effected crucial breakthroughs.

Earlier, Gaikwad, who had smashed the List A world record with seven sixes in a 43-run over during his 220 not out against Uttar Pradesh two days ago, continued in the same vein, clobbering the Assam bowlers for as many as 18 fours and six maximums. It was his third century in four matches.

Bawne, too, notched up his second hundred of the tournament with an innings that had 10 fours and two sixes.

SS Bachhav contributed a 52-ball 41 before becoming a victim of Mukhtar Hussain (3/42), who was the pick of Assam bowlers.

After Gaikwad fell in the 45th over, Maharashtra lost three quick wickets before Shamshuzama Kazi smashed a four and a six to end the innings on a high.

"Pretty Cool To Get A Wish From Sachin Tendulkar": Sania Mirza To NDTV
Comments
Topics mentioned in this article
Ankit Bawne Ruturaj Gaikwad Cricket
Get the latest updates on IPL Auction 2023 and check out  IPL 2023 and Live Cricket Score. Like us on Facebook or follow us on Twitter for more sports updates. You can also download the NDTV Cricket app for Android or iOS.