After the match was over, Shikhar Dhawan shared a reel on Instagram in which he could be seen dancing to "Bolo ta ra ra" song of Daler Mehndi with his teammates. 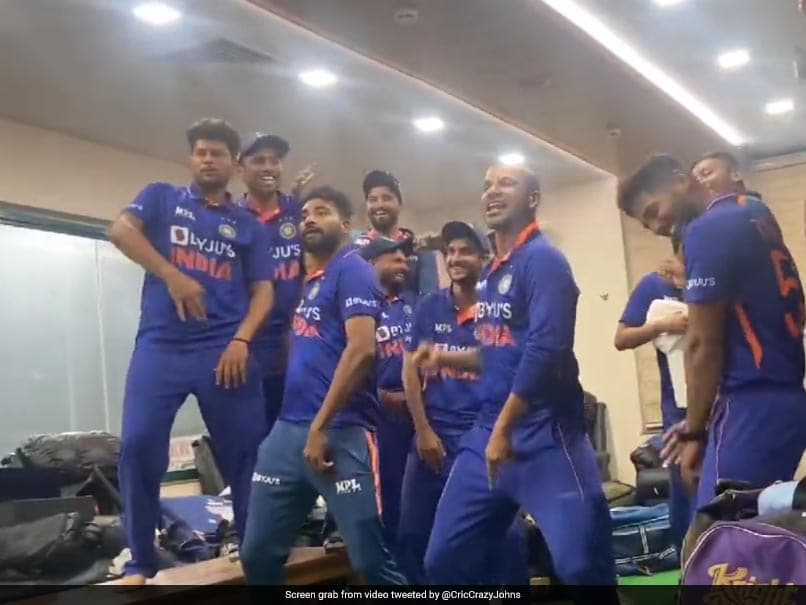 Shikhar Dhawan had some fun time with teammates after their 2-1 ODI series win.© Twitter

India's skipper Shikhar Dhawan had some fun time with teammates after their 2-1 ODI series win over South Africa on Tuesday. The Indian side defeated the Proteas by 7 wickets in the third and deciding ODI match at Delhi's Arun Jaitley Stadium to bag the series. From bringing out his trademark thigh celebration after receiving the winner's trophy to dancing with teammates to cherish the moment, India's stand in skipper for the series, Shikhar Dhawan found it really hard to control his happiness. So was the case of his teammates!

After the match was over, Dhawan shared a reel on Instagram in which he could be seen dancing to "Bolo ta ra ra" song of Daler Mehndi with his teammates.

Talking about the game, Dhawan won the toss in the third ODI and decided to bowl first. The Indian bowlers proved his decision right by bowling out South Africa for 99 runs. Kuldeep Yadav shone with a four-wicket haul while Washington Sundar, Mohammed Siraj and Shahbaz Ahmed claimed two wickets apiece.

Kuldeep returned figures of 4 for 18 in 4.1 overs. His performance included a double-wicket maiden.

On the other hand, South Africa had a dismal outing as seven of their batters were dismissed for single-digit scores. Their bowling too looked ineffective and India comfortably won the game.

In the paltry chase, Shubman Gill's 49-run knock kept India in the driver's seat and the side reached home in 19.1 overs.

Shikhar Dhawan Shreyas Iyer Mohammed Siraj Cricket
Get the latest updates on IPL Auction 2023 and check out  IPL 2023 and Live Cricket Score. Like us on Facebook or follow us on Twitter for more sports updates. You can also download the NDTV Cricket app for Android or iOS.