Watch: Australia Star Says No After Teammate Appeals For LBW. Commentators In Splits

Before taking the DRS, Matthew Wade consulted D'Arcy Short, asking, "Did it pitch in line?" To which Short simply said, "No." 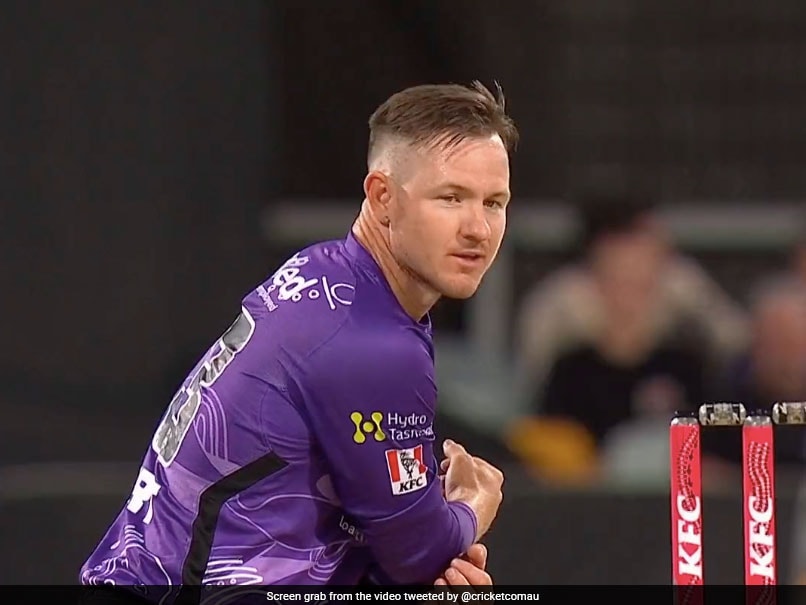 D'Arcy Short in action in the 49th match of the ongoing Big Bash League on Friday.© Twitter

Brisbane Heat defeated Hobart Hurricanes by 12 runs in the 49th match of the ongoing Big Bash League on Friday. Asked to bat first, the Heat posted a total of 162/6 in 20 overs after Matt Renshaw smashed 41 runs off 31 balls. For Hurricanes, Joel Paris was the pick among the bowlers as he registered the figures of 2/15 in four overs. Later, Michael Nesser shone with the ball and scalped three wickets as the Hurricanes were restricted to 150/6 despite powerful knocks from Matthew Wade (45) and Tim David (46*).

A hilarious incident took place during the match which became the highlight of the night. In the 10th over of Heat's innings, D'Arcy Short bowled a spinning delivery to Marnus Labuschagne, which struck him on the pads. Seeing this, wicketkeeper Wade and Short made a huge appeal for LBW but the umpire declared it as not out. Before taking the DRS, Wade consulted Short, asking, "Did it pitch in line?." To which Short simply said, "No."

The response from Short left the commentators in splits as they could not control their laughter after seeing the spinner's hilarious reaction.

Brisbane Heat have won five out of their 12 matches and are standing at the fifth spot on the points table. On the other hand, Hurricanes have also won five matches and are at the seventh position.

Brisbane Heat will now take on Melbourne Stars in their next clash on Sunday while Hurricanes will be going up against Sydney Sixers on Monday.

Matthew Wade Social
Get the latest updates on IPL Auction 2023 and check out  IPL 2023 and Live Cricket Score. Like us on Facebook or follow us on Twitter for more sports updates. You can also download the NDTV Cricket app for Android or iOS.